Ahmad Ahmad, the temporarily reinstated president of the Confederation of African Football, CAF; is eligible to seek re-election, the body’s commission on governance ruled today.

The Malagasy, banned by FIFA in November 2020 for financial wrongdoing and abusing his position was reinstated as the head of African soccer governing body in late January 2021.

The Court of Arbitration for Sport (CAS) at the time said it granted Ahmad an interim ruling to freeze his five-year ban by FIFA ahead of an appeal hearing. It had also promised a verdict the CAF presidential elections on March 12 in Rabat, Morocco.

The CAF commission ruling means that Ahmad is now per CAF rules a candidate for presidential election slated for March 12.

“But he will NOT be eligible to run until also restored as a candidate by Fifa,” BBC sports journalist Piers Edwards tweeted. The world football governing body has yet to rule on the issue.

Piers added: “he may have been restored as a candidate by CAF’s Governance Committee but not by CAF’s ExCo, which determined today that FIFA must have the final say on whether Ahmad can run.”

The candidacies of Mauritanian Ahmed Yahya and South African Patrice Motsepe for the CAF presidency were validated by FIFA after that of Senegal’s Augustin Senghor and Ivorian Jacques Anouma had earlier been passed. 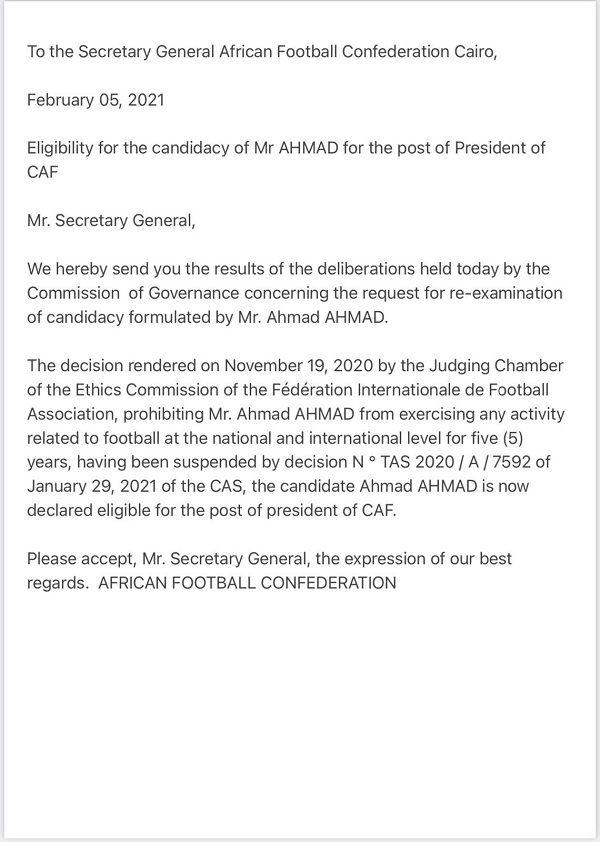 Face2Face Africa  | Per his own autobiography, the late Cameroonian businessman, Victor Fotso, made his way through the world as an enterprising...

africanews  | vAlmost five years have passed since the Eséka railway accident in Cameroon that took 79 lives and left around 600...

The Sun  | ALEX SONG has laid the foundations for a new career… by setting up a construction company. The ex-Arsenal star...

YAOUNDE -VOA | Cameroon’s President Paul Biya has been in power for nearly four decades and is Africa’s oldest and second longest-serving...

euronews  | DOUALA, Cameroon (Reuters) – Coming from Cameroon where letting it be known that she was a lesbian could lead to...

Mixed martial arts heavyweight championship belt holder, Cameroonian-born Francis Ngannou has been officially handed over the letter of congratulations of...

Human Right Watch, HRW has urged the International Monetary Fund, IMF to ask the Government of Cameroon to ensure independent...

The former Moderator of the Presbyterian Church in Cameroon, the Very Reverend Dr. Nyansako Ni Nku passed away at a...

The University of Ngaounderé presents cassava and millet-based beers

Business in Cameroon | The University of Ngaoundéré is currently promoting local beers produced by its biochemistry students. According to the...